Today I learned that my dog is a liar.

He spends most of his days sleeping (except when I want him to be quiet) and I'd call him pretty calm, apart from having anxiety when there's a party and he's not invited (try to exclude him from a mom happy hour and you will subject your friends to the howls of he-who-wants-attention-and-maybe-a-lemon-bar).

Most mornings as I get ready to leave for work, he jumps onto the couch, props his head up on the pillow and looks at me languidly as if to say, "I simply shan't move a muscle until you return."

But today, there was an opportunity to escape and he took it.

A few weeks ago, I got a call from someone on the street next to mine who said my dog was in her yard. He has a tag with my phone number on it, so she called me. My sons and their dad found him, and the front door was found to be the culprit, as it was wide open.

I figured it was an isolated incident. That Parker and Luke had left the door open and he raced out after them. He's spent hours watching them play basketball through the front window, and I thought maybe he saw the chance to finally shoot some hoops. I didn't think he'd try to get out again.

I was at the office this morning, when I got a call from a neighborhood kid who called the number on Charlie's tag after he spotted him in a parking lot behind my alley.

He said Charlie was out roaming around and he'd try to get him back to my house.

My first thought was OMG the boys left the door open again.

My second thought was OMG the boys aren't even home.

My third thought was OMG the dog has figured out how to use a door knob. Or someone broke into my house, quickly saw the dog hair and mess and realized there was nothing of value, but they left the door open and Charlie chased after them. (Not to defend the house, but in case they had a treat).

I stormed out of my cubicle a la Sally Fields's frantic march down the hospital hallway in Steel Magnolias, only less Sally Fields and more frazzled and agitated (frazitated?).

I drove to my neighborhood and caught up with them on the corner of the same street the other neighbor had found him (also where we sometimes walk). But Charlie had made it to the end of that street and was heading down a much busier road. I'm sure if the kid hadn't found him, he might have gotten hit by a car.

I thanked him, he helped me get Charlie into my car and I drove him home and lo and behold -- my front door was cracked open. Turns out I haven't mastered my new door lock, and I thought it was locked, but it actually wasn't. (Yes it was the door's fault actually, somebody tell Ted Cruz).

I'm extremely grateful to this kid, who followed my dog on his little adventure on a very hot day, and and I'm sure Charlie is, too...except that I'm equally sure Charlie thought it was the Best Thing Ever and would do it again in a heartbeat if given the chance.

His wagging tail and giant canine grin said it all.

OMG MOM YOU KNOW WHERE WE GO ON WALKS BUT I'M ALWAYS ON A LEASH WELL TODAY I WALKED ALL BY MYSELF ALSO I MADE A NEW FRIEND AND CAN I HAVE SOME WATER?

So yeah, Charlie, I'm onto you. You're in trouble, Mister. I am serious. No more pepperoni for you, pal.

But just look at this face. 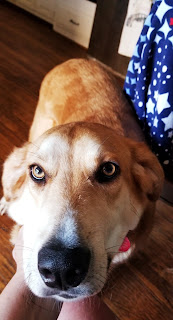