Ah, the new year. A time for reflection, resolution and...rats.

It all started with a New Year's Eve trip to the movies. My neighbor Carrie and I thought this would be "fun." Because as we all know, taking 5 boys to the movies is the very essence of fun. We didn't buy tickets online, because clever mothers that we are, we thought we'd just go early to the theater to get the kid discount. And that is how we ended up with front row seats.

To be fair to our children, they mostly behaved, though my youngest felt it necessary to dance in front of the screen, which they frown upon at the Alamo Drafthouse. And by the end of the movie, all kids were getting a little restless, which is probably why one of their hats slipped to the ground, which is why Carrie knelt down to retrieve it, bumped her head on the arm rest and started out the day with a black eye. #Happynewyear

Then we couldn't find two of our boys, who thought hiding in the Star Wars photo booth in the lobby for 20 minutes was hilarious.

By comparison, January 1, seemed pretty calm ... at first. I woke up to the sound of my oldest son tiptoeing past the door to the office to play video games before his brother woke up. Because obviously, one greets the new year by playing Madden 18 just like EVERY OTHER DAY OF THE YEAR.

By the time I'd made breakfast, both boys were battling over the PlayStation. So I decided this was the perfect time for my second annual traditional Polar Bear Plunge. I mean, it was 16 degrees outside, why wouldn't I jump in my swimming pool? Honestly, I thought it might distract my kids from killing each other, plus I'm a sucker for pseudo-sporting events that are really, really short in duration and involve minimal effort (Derby Day comes to mind).

I called Carrie to come over and witness my insanity, attempted to pick up the eviscerated remains of a couch cushion left by the dog, and yelled upstairs to the kids. They all opted to watch from indoors -- my oldest son waving at me from the office window, because clearly, Mom braving cold water was not worth walking down a flight of stairs. (This, from the same child who feels perfectly comfortable playing catch outside in shorts when it's 30 out, but hey, priorities).

With Carrie cheering me on, I walked into the pool... and yes, in case you're wondering, it was really @#$%%^ cold -- and then finally jumped in. For like a second. I said it was a plunge, not a swim -- insanity has its limits.

Twenty minutes later, I was in warm clothes, and Carrie and I were enjoying a post-plunge mimosa by the fire. Sure, I still couldn't feel my toes, but the Prosecco was helping...or at least helping me not to care about such trivialities as nerve endings. All was peaceful and bright. And then...

"Uh oh," Carrie said. "I think something might have broken."

I turned toward the dining room to see a massive spray of water pelting the window. My first thought was that a freak storm had just hit. My second thought was that hurricane season was over and I was an idiot, and the next few seconds unfolded like a certain Christmas poem.

When out the dining room window there arose such a clatter
I sprang (away from the Prosecco) to see what was the matter.
Away to the patio, I flew in a dash...
To get hit with freezing cold water in a mighty cold splash.
When what to my wondering eyes should appear,
But a leak in a pipe ...yep, happy new year.


I tried to stem the water flow, and only succeeded in getting soaked. Desperate, I threw the patio rug over the pipe, which at least stopped the hurricane from battering my dining room window...and created a nice, oozing flood in my backyard. Carrie phoned her husband, Blake, who gamely came over to investigate, despite being sick, and then turned off the water. Going against what I tell my kids nearly every day, I found myself shouting, "DON'T ANYONE FLUSH THE TOILET" while we investigated the now only-seeping leak.

We spotted the hole, and decided we'd try to patch it up. Then, just before he left to get some plumbing tape, Blake casually mentioned, "Oh, and you've got a dead rat right there."

RIGHT.
WHERE.
I.
WAS.
KNEELING.

Now, if you know me at all, I don't need to explain the impact of those words and you'll understand completely why I shrieked, ran inside and cursed 2018. By this point, my sick husband Mike (was anyone NOT sick this holiday??) came downstairs and agreed to dispose of the rat. He went outside with a trash bag. Blake came back inside, muttering, "I think I'm gonna be sick" -- because when you're already ill, a juicy, bloated rat corpse is just icing on the cake. Mike was out there for a while, before coming back in for a shovel, which did not bode well. Carrie offered to hold the body bag at this point. She then mused whether the rat had been lying there in the open all along, or whether the geyser of water had shot it into the air. Because you know what's worse than a dead rat? #Ratnado.

Once the rat corpse was gone, I went out with the plumbing tape -- as though I had any idea what I was doing, while Carrie helped me cut it and then took a snapshot of our plumbing prowess. Because a friend will video you jumping into a cold pool. A really good friend will bag a rodent, help you wrap a pipe and take a plumbing selfie.

Two Chicks Plumbing - you bring the leak, we bring the Prosecco. 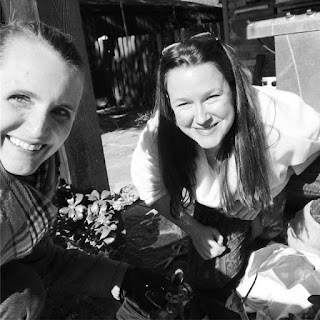 Of course, once the water was turned back on, the water still spurted, but not with the same raging-rapid intensity. And turns out there's this valve thing you can turn off, which only shuts off the water to the backyard. Or maybe just that pipe. Whatever. All I know, is days later when an actual handyman came out to fix the leak, it took him FOREVER (ok, 5 minutes) to cut the tape we had oh-so-carefully wrapped around the pipe. So yeah, not bragging or anything, but if you need a pipe taped...well, you know who to call.

The rest of the afternoon was pretty uneventful, because ... well, how do you top a leaking pipe and a dead rat? But once we finished our black-eyed peas for luck (you know what would be lucky? No rats in 2018), we did settle into blankets in the den to watch Best in Show. Because when you're wiped out after RatPipeCopalypse, you can "not talk or talk forever and still find things to not talk about."

So yeah, that's January so far. I'd like to think the rest of the month will be more peaceful, but I know better; Science Fair projects are due in 10 days.